Your balance is made up of 3 primary systems: VISION, SENSORY, AND VESTIBULAR (equilibrium from the ears). Each system plays a role in keeping you upright and preventing a fall. How do each of these systems work? 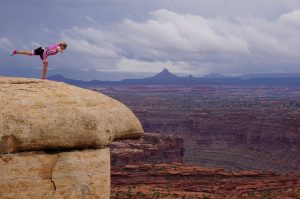 Your vision provides you with information about WHERE you are compared to your surroundings. You can use it to help with balance by focusing on a specific object to tell your brain that you are upright compared to that object. Your vision is also your first source of danger, so it will tell your brain if you need to move quickly to avoid a dangerous situation.

With age, our vision begins to deteriorate and can affect our balance.

Your sensory system (or Somatosensory) is a combination of what you feel and how your joints move to tell your brain where your BODY is in space. It is your primary balance system on firm and flat surfaces, making up to 70% of your overall balance.

With age, loss of sensation can occur, as well as decreased mobility in our joints. One, or both, of these can affect our balance.

Your vestibular system, or inner ear balance, tells your brain where your HEAD is in space. It is your primary balance system on unstable surfaces such as, grass, gravel, uneven sidewalks, stairs, ramps, and sand. It makes up to 60% of your overall balance on these surfaces. This system is also responsible for keeping your eyes still while your head is moving, telling your brain what direction and how fast your head is moving, and if your body is moving through space. Impairments in this system can cause dizziness with motion.

With age, hearing loss and basic degeneration of the vestibular organ can affect your balance.

We specialize in treating dizziness and balance disorders that come with aging, or with any other neurological injury such as, stroke, Parkinson’s Disease, Multiple Sclerosis, and brain injury.

Benign Paroxysmal Positional Vertigo, better known as BPPV, is the most common cause of dizziness over the age of 65, but can occur at any age.  The most common symptom is usually spinning dizziness (vertigo) with positional changes, such as rolling over in bed, sitting up, lying down, bending over, or looking up.  People with BPPV will feel that the room spins when they perform those positional changes.  Symptoms of dizziness generally last less than 30 seconds, but imbalance tends to be constant throughout the day.  What is the mechanism of this problem?

The vestibular system sits behind the inner ear and is made up of 2 otolith organs (the saccule and the utricle) and 3 semicircular canals (anterior, posterior, and horizontal) that are filled with fluid.  This fluid moves in the canals as the head moves, sending a message to the brain to let it know how far, how fast, and in what direction the head has moved.  This system is important for balance by providing head position information and stabilization of the eye muscles to allow vision to take in information properly.  Located inside the utricle is a sticky membrane that holds a “pile” of calcium carbonate crystals, known as otoconia.  When these “crystals” come out of position and fall into one of the canals, BPPV occurs.

The otoconia are dense and heavy.  The pull of gravity on the otoconia are what cause them to move inside the utricle in a normal situation, which sends information to the brain about head motion.  When they are out of place, and the head moves relative to gravity, the crystals move within the canal.  This causes the fluid to move at an abnormal rate, sending an abnormal signal to the brain.  The head may stop it’s motion, but the brain thinks the head is still moving due to the otoconia still moving inside the canal.  This also causes an inability of the system to stabilize the eyes and rapid movement occurs, called nystagmus.  This is why it appears the room is spinning.  Once the otoconia stop moving, the system stops until another movement occurs again.  Because of the displacement of the crystals, the system is “off” and creates a sense of imbalance in the person.

What can be done if this occurs?  How is this treated?

Treatment is done through a technique called the canalith repositioning maneuver.  This is a series of head movements to “roll” the crystals through the canal and allow them to drop out and return to their original location, the utricle.  Many times this can be achieved in as little as one treatment, but may require more depending on how each individual system responds.  Imbalance may continue to be a problem for several weeks after treatment.

A skilled Physical Therapist trained in vestibular rehabilitation can treat BPPV.  While there is plenty of information on the internet, it is important to know the canal that is involved to treat the problem properly. Most sites will describe one form of treatment, but there are actually many different treatments. Improper treatment can make the problem worse by moving the crystals into additional canals. The side involved, the canal involved, and whether the crystals are free moving or attached, all determine which treatment is appropriate and that can be done by a Physical Therapist that specializes in vestibular rehabilitation.

Don’t let an easily treatable problem go untreated!  You’ll feel better in a short matter of time and back to yourself.

Welcome To Our Blog

Vestibular Rehabilitation is a type of therapy that treats dizziness and balance issues. Many times dizziness comes from problems that arise behind the inner ear in the vestibular system. This type of dizziness can be described many ways including, but not limited to, spinning, lightheadedness, and a “woozy” feeling. This system is also a large part of balance, and impairments can make a person unsteady or even cause falling.

Concussion physical therapy can include treating issues with post injury migraines/headaches, visual issues after head trauma, neck pain, as well as dizziness and balance problems. Our focus is on returning everyone back to normal life and back to the things they love.

Neurological Rehabilitation is treatment of injuries that involve the brain or the spinal cord. These injuries can include stroke of all kinds, brain tumors, Multiple Sclerosis, Parkinson’s disease, and spinal cord injuries to name a few. Therapy involves improving strength, learning to walk again, addressing balance and mobility problems, and working on activities of daily living such as getting into or out of bed, bathing, dressing, etc. Our goal is to maximize function and return independence as much as possible.

The mission of Dynamic Mobility & Balance Center is to provide quality service and exceptional patient care utilizing evidence based practice. We use compassion and expertise to return our patients to the best possible quality of life.